TORONTO and DALLAS, March 22, 2017 /CNW/ – Milestone Apartments Real Estate Investment Trust (TSX: MST.UN) (“Milestone” or the “REIT”) today announced that the REIT has filed its Management’s Discussion and Analysis and Audited Consolidated Financial Statements for the year ended December 31, 2016 on SEDAR. These documents are available on the REIT’s website at www.milestonereit.com. 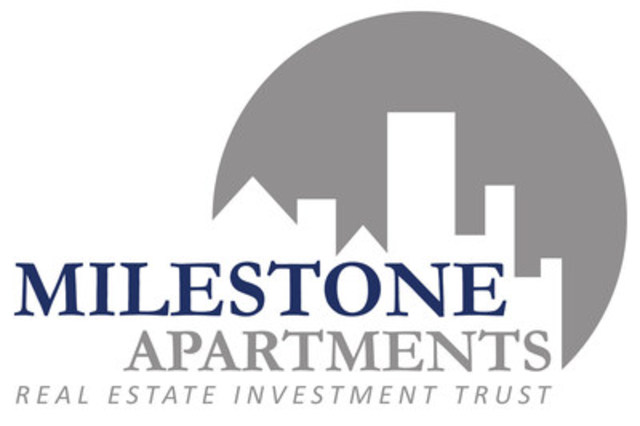 In the fourth quarter of 2016 (“Q4 2016”) and full-year of 2016 the REIT experienced solid operating and financial performance as well as strong unit price appreciation. However, the near-term outlook for the U.S. multifamily market is showing signs of a slowdown, particularly when compared to the past few years of outsized performance. Changing factors include moderating rental rate growth owing in part to the impact of new supply and the potential for expanding capitalization rates amid rising interest rates.

“We are extremely pleased with the substantial value the Milestone team has created for the REIT’s unitholders this past year and since Milestone’s IPO,” said Robert Landin, CEO of Milestone. “While Milestone has been a very strong investment, the current market environment is beginning to moderate compared to the past few years.”

Mr. Landin continued, “As a result of this evolving industry landscape, we expect our ability to drive similar organic and external growth to be impacted going forward, which could potentially adversely affect our ability to grow NOI and AFFO as well as unitholder value creation.”

The industry outlook section of the REIT’s Management’s Discussion and Analysis of Results of Operations and Financial Condition includes a discussion of the outlook for the U.S. multifamily market. Highlights include:

In light of the REIT’s pending transaction (the “Transaction”) with an affiliate of Starwood Capital Group, Milestone will not be hosting an earnings call or webcast to discuss its fourth quarter and year ended December 31, 2016 results.

The REIT is an unincorporated, open-ended real estate investment trust that is governed by the laws of Ontario. The REIT’s portfolio consists of 78 multifamily garden-style residential properties, comprising 24,061 apartment units that are located in 16 major metropolitan markets throughout the Southeast and Southwest United States. The REIT is the largest real estate investment trust listed on the TSX focused solely on the United States multifamily sector. Milestone’s vertically integrated platform employs more than 1,200 employees and manages more than 50,000 apartment units across the United States. For more information, please visit www.milestonereit.com.

This press release contains certain non-IFRS financial measures including FFO, AFFO and NOI,  and related amounts to measure, compare and explain the operating results and financial performance of the REIT. These measures are commonly used by entities in the real estate industry as useful metrics for measuring performance. However, they do not have any standardized meaning prescribed by IFRS and are not necessarily comparable to similar measures presented by other publicly traded entities. These measures should be considered as supplemental in nature and not as a substitute for related financial information prepared in accordance with IFRS. Please refer to the REIT’s Management’s Discussion and Analysis for the fourth quarter and year ended December 31, 2016 for a reconciliation of NOI, FFO and AFFO to standardized IFRS measures.

To view the original version on PR Newswire, visit: http://www.newswire.ca/en/releases/archive/March2017/22/c3220.html