TORONTO, Sept. 29, 2017 /CNW/ – Becoming a home owner in Canada is less affordable now than at any time since 1990, according to the latest Housing Trends and Affordability Report issued today by RBC Economics Research. 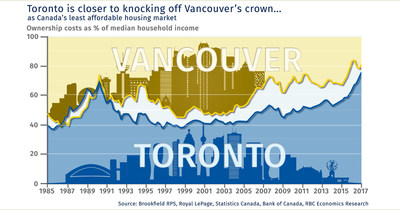 In spite of policy actions such as the Ontario’s Fair Housing Plan implemented in April to cool the market in the Toronto area, RBC’s national aggregate affordability measure in the second quarter of 2017 stood at 46.7%, up 1.4 percentage points and at its highest level since 1990. A rise in the measure represents a deterioration in affordability. The national housing affordability number â which is calculated as a share of household income â saw an eighth straight quarterly increase, representing a continued erosion of affordability for prospective home owners.

“Once again, the Toronto area played a big role in shifting up the national affordability needle in Q2″, said Craig Wright, Senior Vice-President and Chief Economist, RBC. “While Ontario’s Fair Housing Plan did cause a reaction on the part of buyers and sellers in April, the impact on prices wasn’t felt immediately. In the end, any evidence of price moderation in the Toronto region emerged too late to make a difference in the second quarter.”

In the Toronto area, RBC’s aggregate housing affordability measure reached 75.4% (up from 71.1% in the first quarter), a new record high. The rise in Toronto was a 12th straight increase and reflected the fact that price softening following the Ontario Fair Housing Plan did not immediately translate into the quarterly average prices.

Meanwhile, in Vancouver, it seems that the period of housing affordability relief has likely come to an end. House prices began to rise again in the second quarter, following back-back quarterly declines in the wake of the market-cooling policy measures last year that included a foreign buyers’ tax. Elsewhere in British Columbia, Victoria has seen housing affordability pressures intensify steadily in the past year: the city saw the second-largest increase in RBC’s affordability measure since the second quarter of 2016 (after Toronto) and now lies at a near-record 58.6%.

Poor affordability in parts of southern Ontario and British Columbia skew the overall picture across the country. Most markets outside Ontario and British Columbia saw only modest changes in RBC’s aggregate measure in the second quarter and trended towards long-term averages. Relative to a year ago, there were slight improvements in many areas of the Prairies and a marginal deterioration in several markets in Quebec and the Atlantic region.

“Rising interest rates could have significant implications for housing affordability nationwide,” continued Craig Wright. “After back-to-back increases to interest rates in June and September, there are indications that the Bank of Canada will likely make one more before the year’s end and three more times in 2018 for a total increase of 100 basis points. We estimate that this potentially could lift the RBC aggregate affordability measure up by a further 3.5% nationwide, although other factors such as income gains would have a mitigating effect.”

About RBC
Royal Bank of Canada is Canada’s largest bank, and one of the largest banks in the world, based on market capitalization. We are one of North America’s leading diversified financial services companies, and provide personal and commercial banking, wealth management, insurance, investor services and capital markets products and services on a global basis. We have approximately 81,000 full- and part-time employees who serve more than 16 million personal, business, public sector and institutional clients through offices in Canada, the U.S. and 35 other countries. For more information, please visit rbc.com.â