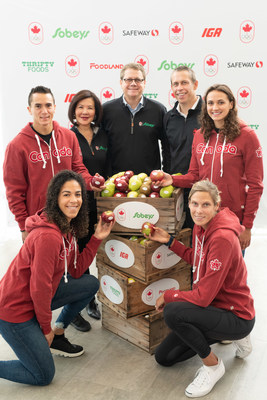 “No sporting event brings the country together like the Olympics. It’s the highest honour for Empire to support our athletes, who come from every corner of Canada for the love of sport and country,” said Michael Medline, President & CEO, Empire Company Limited. “Today, we stand alongside Canadian athletes to help them achieve their dreams on the world stage. The qualities inherent to great athletes â passion, a drive for excellence, a love for community and country â are the qualities our grocery stores strive for every day.”

“The eyes of our nation are on Team Canada for two weeks every two years, but a lifetime of training and dedication go into the moments we celebrate as a nation. We want to be there to support our athletes 365 days a year, and our partnership will deliver against that vision,” added Medline.

“The Canadian Olympic Committee is extremely excited to announce Empire Company as the first-ever Official Grocer of Team Canada,” said Canadian Olympic Committee Chief Executive Officer and Secretary General, David Shoemaker. “As a proud Canadian company, Empire has been committed to supporting hundreds of communities over the past 113 years to celebrate the natural connection between family, food and sport. This partnership signifies our joint promise to provide that same commitment to our athletes and broader sport community coast to coast to coast.”

Empire today also unveiled a pivotal partnership with Hockey Canada, a sport partner of the Canadian Olympic Committee. In its efforts to raise awareness around female participation in Sport in Canada, Empire will be the exclusive partner of the Canadian National Women’s Hockey Team. Sobeys will support and celebrate the team leading up to and on the Olympic stage, as well as at the 2020 IIHF Women’s World Championship held in Sobeys’ home province of Nova Scotia.

“Canada’s National Women’s Hockey team is one of Canada’s most beloved sports teams,” said Sandra Sanderson, Senior Vice-President of Marketing, Sobeys Inc. “Cheering them on at home and abroad as they continue to reach for gold will give us many opportunities to celebrate alongside Canadian families. Through our Hockey Canada partnership, we will create excitement and engagement around women’s hockey and inspire the next generation of young women who love the game.”

“We are proud to be partnering with Sobeys to ensure that our National Women’s Hockey Team athletes have the support they need to compete at the highest level and also working together to tell stories that will bring Canadians closer to the game they love,” added Mike Ross, chief business development officer for Hockey Canada.

Additional financial information relating to Empire, including the Company’s Annual Information Form, can be found on the Company’s website at www.empireco.ca or on SEDAR at www.sedar.com.

ABOUT THE CANADIAN OLYMPIC COMMITTEE
The Canadian Olympic Committee leads the achievement of Team Canada’s podium success and advances Olympic values across Canada. Independent and predominantly privately funded, the COC delivers the resources that Canada’s elite athletes need to perform at their best and give their everything every day. By sharing our athletes’ stories, we inspire all Canadians through the power of sport: 24 hours a day, 7 days a week, 365 days a year.