WINNIPEG, Feb. 28, 2019 /CNW/ – Today Artis Real Estate Investment Trust (“Artis” or the “REIT”) issued its financial results and achievements for the year ended December 31, 2018.  This press release should be read in conjunction with the REIT’s consolidated financial statements and Management’s Discussion and Analysis (“MD&A”) for the year ended December 31, 2018.  All amounts are in thousands of Canadian dollars unless otherwise noted. 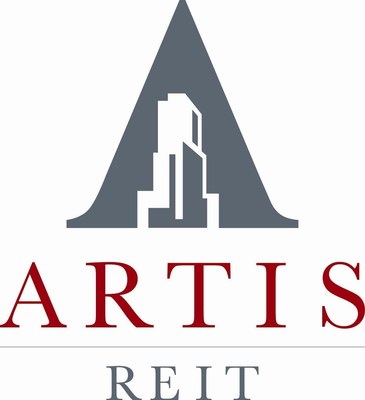 Effective November 1, 2018, the REIT’s distribution was reset to $0.54 per unit annualized.  Normalized FFO payout ratio and normalized AFFO payout ratio, calculated pro forma for the revised distribution, were 41.5% and 55.7%, respectively, for the year ended December 31, 2018.

(1) Represents a non-GAAP measure.  Refer to the Notice with Respect to non-GAAP Measures.

During 2018, Artis acquired the following properties:

On March 7, 2018, the REIT acquired the remaining 50% interest in 1700 Broadway and Hudson’s Bay Centre, two office properties located in the Greater Denver Area, Colorado.  The aggregate purchase price was US$70.0 million (Artis’ IFRS  value at December 31, 2017) and was satisfied through the assumption of the existing mortgages and the issuance of the REIT’s common units.

On October 5, 2018, the REIT acquired the remaining 10% interest in Park Lucero II, an industrial property located in the Greater Phoenix Area, Arizona for total consideration of US$1.6 million.

On October 19, 2018, the REIT acquired a surface parking lot ancillary to an existing office property in Winnipeg, Manitoba for  a purchase price of $10.5 million.

During 2018, Artis also acquired the following parcels of development land:

(1) The REIT acquired an 80% interest in this joint venture arrangement.

During 2018, Artis completed the disposition of the following properties:

(1) The REIT disposed of its 50% interest in this joint venture arrangement.

During 2018, Artis repaid mortgage debt related to the disposition of the above properties in the aggregate amounts of $34.7 million and US$8.6 million.

At December 31, 2018, Artis had $66.1 million of cash on hand and $225.3 million available on its revolving term credit facilities.  Liquidity and capital resources will be impacted by financing activity, portfolio acquisition and disposition activities and debt repayments occurring subsequent to December 31, 2018.

Artis has numerous development projects in process.  The table below lists the ongoing projects and completion progress.  Additional information pertaining to each project can be found in the 2018 MD&A.

(1) Percentage leased is based on occupancy at December 31, 2018, plus commitments on vacant space.

Additional information pertaining to these projects and Artis’ future development initiatives can be found in the 2018 MD&A.

Artis’ portfolio has a stable lease expiry profile with 41.9% of gross leasable area expiring in 2023 or later and 21.7% of the 2019 expiries renewed or committed to new leases at December 31, 2018.  Weighted-average in-place rents for the entire portfolio are $13.48 per square foot and are estimated to be 1.3% below market rents.  Information about Artis’ lease expiry profile is as follows:

Artis remains committed to maximizing its unit purchases under the NCIB program for the upcoming year.

From November 1, 2018, when Artis announced its intention to purchase units through its NCIB, until February 28, 2019, the REIT has purchased the following:

Alternatively, you may access the simultaneous webcast by following the link from our website at www.artisreit.com/investor-link/conference-calls/ during or after the conference call and webcast. Prior to the webcast, you may follow the link to confirm you have the right software and system requirements.

NOTICE WITH RESPECT TO NON-GAAP MEASURES

In addition to reported IFRS measures, the following non-GAAP measures are commonly used by Canadian real estate investment trusts as an indicator of financial performance.  “GAAP” means the generally accepted accounting principles described by the CPA Canada Handbook – Accounting, which are applicable as at the date on which any calculation using GAAP is to be made.  Artis applies IFRS, which is the section of GAAP applicable to publicly accountable enterprises.  These non-GAAP measures are not defined under IFRS and are not intended to represent operating profits for the period, or from a property, nor should any of these measures be viewed as an alternative to net income, cash flow from operations or other measures of financial performance calculated in accordance with IFRS.  Readers should be further cautioned that the following measures as calculated by Artis may not be comparable to similar measures presented by other issuers.

The REIT has properties held in its investments in joint ventures, which are accounted for using the equity method in its consolidated financial statements in accordance with IFRS.  Amounts presented on a Proportionate Share basis include Artis’ interest in properties held in its joint ventures based on its percentage of ownership in these properties in addition to the amounts per its consolidated financial statements.  Management is of the view that presentation on a Proportionate Share basis is meaningful for investors as it is representative of how Artis manages its properties as well as certain operating and financial metrics.  Artis does not independently control its unconsolidated joint ventures, and the presentation of pro-rata assets, liabilities, revenue and expenses may not accurately depict the legal and economic implications of the REIT’s interest in its joint ventures.  Unless otherwise noted, comparative period amounts have been updated to reflect the current period’s presentation.

Artis calculates Same Property NOI by including Property NOI for investment properties that were owned for a full quarterly reporting period in both the current and comparative year, and excludes properties held for (re)development.  Adjustments are made to this measure to exclude non-cash revenue items and other non-recurring revenue amounts such as lease termination income.  Management considers Same Property NOI to be a valuable measure for evaluating the operating performance of the REIT’s properties due to changes in occupancy, rental rates and the recovery of property operating expenses and realty taxes.

Artis calculates FFO in accordance with the guidelines set out by the Real Property Association of Canada (“REALpac”), as issued in February 2018.  Management considers FFO to be a valuable recurring earnings measure for evaluating the REIT’s operating performance as it adjusts net income for gains or losses that are not recurring in nature such as fair value gains or losses on investment properties.

Artis calculates AFFO in accordance with the guidelines set out by REALpac, as issued in February 2018.   Management considers AFFO to be a valuable recurring earnings measure for evaluating the REIT’s operating performance.

Artis calculates EBITDA as net income, adjusted for interest expense, transaction costs, income taxes and all non-cash revenue and expense items.  Management considers this ratio to be a valuable measure of Artis’ ability to service the interest requirements on its outstanding debt.

Artis calculates GBV based on the total consolidated assets of the REIT, adding back the amount of accumulated depreciation of property and equipment.  The REIT has adopted debt to GBV as an indebtedness ratio used to measure its leverage.

Artis calculates debt to EBITDA based on annualizing the current quarter’s EBITDA as defined above and comparing that balance to Artis’ total outstanding debt.  Management considers this ratio to be a valuable measure of Artis’ leverage.

Artis calculates NAV per unit as its unitholders’ equity, adjusted for the outstanding face value in Canadian dollars of its preferred units, divided by its total number of dilutive units outstanding.  Management considers this metric to be a valuable measure of the REIT’s residual equity available to its common unitholders.

Artis is subject to significant risks and uncertainties which may cause the actual results, performance or achievements of the REIT to be materially different from any future results, performance or achievements expressed or implied in these forward-looking statements.  Such risk factors include, but are not limited to, risks related to the implementation of Artis’ new initiatives, risks associated with real property ownership, availability of cash flow, general uninsured losses, future property acquisitions and dispositions, environmental matters, tax related matters, debt financing, unitholder liability, potential conflicts of interest, potential dilution, reliance on key personnel, changes in legislation and changes in the tax treatment of trusts.  Artis cannot assure investors that actual results will be consistent with any forward-looking statements and Artis assumes no obligation to update or revise such forward-looking statements to reflect actual events or new circumstances. All forward-looking statements contained in this press release are qualified by this cautionary statement.

The Toronto Stock Exchange has not reviewed and does not accept responsibility for the adequacy or accuracy of this release.