MISSISSAUGA, ON, Nov. 5, 2019 /CNW/ – These women changed the face of the military forever, paving the way for generations of their sisters to come. 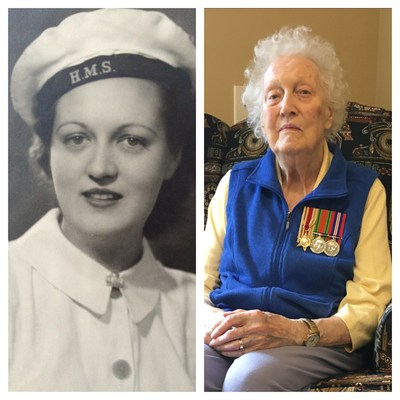 On this Remembrance Day, Chartwell Retirement Residences is proud to share the sometimes untold stories of the integral wartime roles of women as we thank all Veterans for their service.

WWII was the first time in history that women were able to serve Canada in uniform â and more than 50,000 did. The Canadian Women’s Army Corps had 21,600 members. The Women’s Division Royal Canadian Air Force had 17,400 and the Women’s Royal Canadian Naval Service had 7,100. Nearly 5,000 Canadian military nurses supported combat forces, often in range of enemy guns on battlefields and some lost their lives.

These women took on nontraditional roles and excelled, side by side with military men.

Many of them now live in Chartwell Retirement Residences, along with women who served with Allied forces and during the Cold War. Some chose not to revisit that time of their lives, the memories still too painful, while others were glad to have women’s wartime contribution recognized.

“We have a desire to serve,” said Elsie Bevan, 87, a Royal Canadian Air Force corporal during the Cold War. “Women pour themselves out.”

“Remembrance Day allows us to recognize all of the men and women who have sacrificed so much in the name of justice and liberty. Without them, we would not have the country we have today; the peaceful, welcoming place we are so proud to call home,” said Brent Binions, President and CEO. “I know I speak for everyone at Chartwell in expressing gratitude and appreciation for their courage and devotion.”

The women war heroes of Chartwell Retirement Residences are numerous and each has made an important contribution to peace. These are just a few of their stories:

Assigned as an evacuation ambulance driver, Dodie drove through the dead of night to lessen vulnerability to enemy attack, the vehicles travelling in tight convoys through foggy, blacked out countryside to meet planes delivering broken soldiers from the battlefields.

“One of them said, ‘Oh! After all I’ve been through, I’ve got a woman driver!’ To him, that was the very end. However, I got him safely to his train,” says Dodie, a resident of Chartwell Scarlett Heights Retirement Residence in Etobicoke, ON. “There weren’t too many funnies. It was serious work, as you could imagine. You couldn’t get emotional. You just had to do your job.”

Fellow Scarlett Heights resident Jean Perdue, 95, who was assigned to a Royal Canadian Air Force Women’s Division intelligence unit, writes a new poem each Remembrance Day. The final verse of this year’s, titled Why Did They Die? reflects on the shrinking number of War Service Veterans. Veterans Affairs Canada estimates 39,700 men and women are living with an average age of 93. Jean wrote:

Now we remaining veterans are old and frail
We savour our good life in every detail
We know our time is drawing nigh
When we will be called up on high
Meeting those who perished
They will be young
In heaven to each other
They have clung
Waiting for our souls to arrive
Then we will all rejoice in those heavenly skies.

“I was once asked if I ever thought about the German sailors my vigilance might have doomed, ” says Lois, 95, a resident of Chartwell Colonel Belcher Retirement Residence in Calgary, AB. “But this was war. And look what the Germans were doing to our troop ships and the men abroad.”

The coded communiques were sent on to the intelligence centre in Ottawa and then to British Intelligence Operations, which was based at the covert Bletchley Park made famous by movies like The Imitation Game.

“It had a round drum on either side out of which came a narrow strip of white paper,” recalled the resident of Chartwell Martha’s Landing Retirement Residence in Burlington, Ontario. “When I finished doing what I had to do, that machine produced at identically the same time the coded version out of one drum and the plain language version out of the other. Imagine.”

Historians credit Britain’s code and cipher operation with shortening the war by up to four years.

Mary Cranch, 92, Entertainer
An inability to swim disqualified Mary Cranch from basic training – but sent her off on an adventure. Touring England and sharing a program with showbiz stars Wayne and Shuster and The Happy Gang, she was one of the “beauteous gals” of the Canadian Army Show, as a newspaper report from the time described them.

“We danced for orphans and the soldiers and visited people in the hospital. We had shows every day, sometimes twice a day,” the resident of Chartwell Westmount Retirement Residence in Kitchener, ON recalled.

Their mission was to raise spirits and comfort suffering â and wherever they went, they were greeted with a rousing chorus of the show’s theme song: “Here come the girls of the Army Show we hear so much about. And everybody smiles at them and gets the mush out.”

Elsie Bevan, 87, Langley, British Columbia â Watching For Danger From The Skies
As a Royal Canadian Air Force corporal during the Cold War, working in classified environments, Elsie monitored the skies of Canada and the US. If any plane strayed more than five minutes from its flight path, fighter planes scrambled to confirm its identity.

Serving on home soil, the threat felt no less real. She would awake from terrifying dreams of being at work facing an imminent Russian invasion.

“The first thing we were taught was ‘Loose lips sink ships.’ So you kept your mouth shut absolutely,” says Elsie, a resident of Chartwell Renaissance Retirement Residence in Langley, BC.

“One time, there was some secret information that had to be passed on and I had a briefcase that was chained to my arm with a key to take it where it was sent off.”

About Chartwell Retirement Residences
Chartwell Retirement Residences is the largest owner and operator of seniors housing communities across the country, from independent supportive living through assisted living to long term care. Chartwell is committed to its vision of Making People’s Lives BETTER and to providing a happier, healthier, and more fulfilling life experience for seniors. www.chartwell.com